Here’s a fun fact:
The first Christmas tree farm in the United States is believed to have begun in 1901 when 25,000 Norway Spruce trees were planted by W. V. McGalliard in Mercer County, near Trenton, New Jersey. The trees were sold seven years later for $1.00 each. Despite the early pioneers of the industry, by the late 1940s 90 percent of all natural Christmas trees sold in the United States were still harvested from forests. The most popular species during that era, Balsam Fir, Douglas-fir, Black Spruce and White Spruce, were all readily available from forests.

Following World War II more trees began to be planted in plantations. Other changes were taking place as well, in the late 1940s and early 1950s farmers began to sheer trees in respond to customer demands for denser trees. During the 1960s the market for Christmas trees in the United States began to change. The number of part-time growers declined, while some part-time growers ceased operations others expanded their operations and became full-time Christmas tree farmers. Expansion occurred in all major U.S. Christmas tree growing regions, Michigan, the Pacific Northwest and North Carolina. 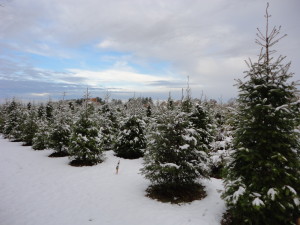